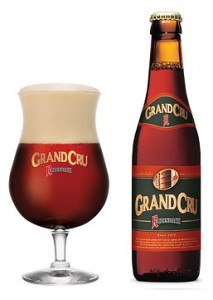 “Rodenbach” Grand Cru – a beer for connoisseurs, which is famous beer critic Michael Jackson rightly called the “world classics” and the “Burgundy of Belgium.” Beer “Rodenbach” Grand Cru is created from one-third of the young beer, and two-thirds of the beer, matured in oak barrels for two years. As a result, the complex is born, harmonious beer, like a fine wine, with a rich bouquet, sweet and sour taste and a very long finish. 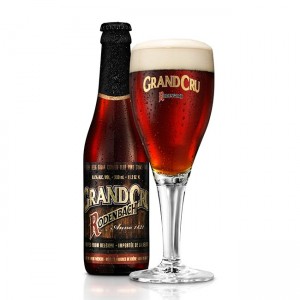 In the process of beer “Rodenbach” Grand Cru goes through two stages of fermentation. The first stage of fermentation is unique because the yeast are combined with top-fermented lactic flora. Re-fermentation in oak barrels filled with a bunch of beer rich fruity notes. The barrels used for aging, made at the brewery by the method used since 1821. For their manufacture is taken very good wood without knots, do not apply nails and screws, only the iron rings. Beer should be served chilled to 6-8 ° C.

Rodenbach family was engaged in brewing in 1821. His style owes Eugene Rodenbach brewery, which is before you get to work in the family business, was in the South of England, where he practiced in the brewing and got a deep knowledge of the London-style Porter deliberate “acidification” of beer through its maturation in wooden barrels. 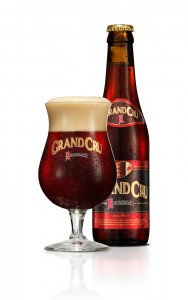 Eugene has adopted a process of aging wine in oak barrels in order to improve the quality and “acidification” of beer. Thus, Eugene became the founder of the current path of Rodenbach brewery. Up until 1998, it belonged to the family brewery Robendah.
In 1998, the decision was made, preserving their identity, go to the management of a brewery Palm, which deals with “Rodenbach” as a very important cultural project to preserve the unique Belgian mixed type of fermentation for future generations