Moortgat brewery was founded in 1871 by Jan-Leonard Moortgat, who was descended from a family of brewers that lived in Steenhuffel,Belgium. In the 1950s, the third generation of Moortgats took control of the brewery.

In the early 1970s, when the company was struggling financially, Moortgat bottled and distributed t 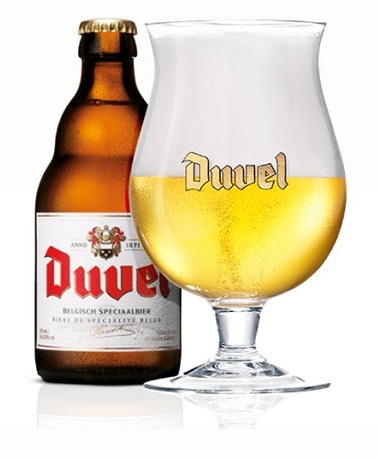 he Danish beer, Tuborg. The two companies ended this arrangement in the early 1980s, but it did save the brewery who, by then, had managed to also set up massive distribution channels for their flagship beer, Duvel. In June 1999, Duvel Moortgat NV went public on Euronext Brussels.

Duvel Moortgat was an original investor in the Brewery Ommegang craft brewery founded in Cooperstown, NY, in the late 1990s. More recently, the Belgian company took over complete control of the brewery and founded a stateside sales organization 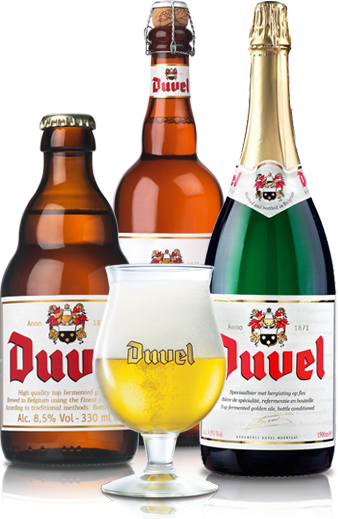 Duvel USA to handle both Ommegang and Duvel Moortgat brands and others.

In 2010 Duvel Moortgat nv acquired of 100 percent of the shares of the De Koninck Brewery. With this acquisition, Duvel Moortgat was able to expand its portfolio of specialty beers.

A Duvel is still seen as the reference among strong golden ales. Its bouquet is lively and tickles the nose with an element of citrus which even tends towards grapefruit thanks to the use of only the highest-quality hop varieties. This is also reflected in the flavour, which is beautifully balanced with a hint of spiciness. Thanks to its high CO2 content, this beer has a wonderful roundness in the mouth. A Duvel is both the perfect thirst quencher and the ideal aperitif. 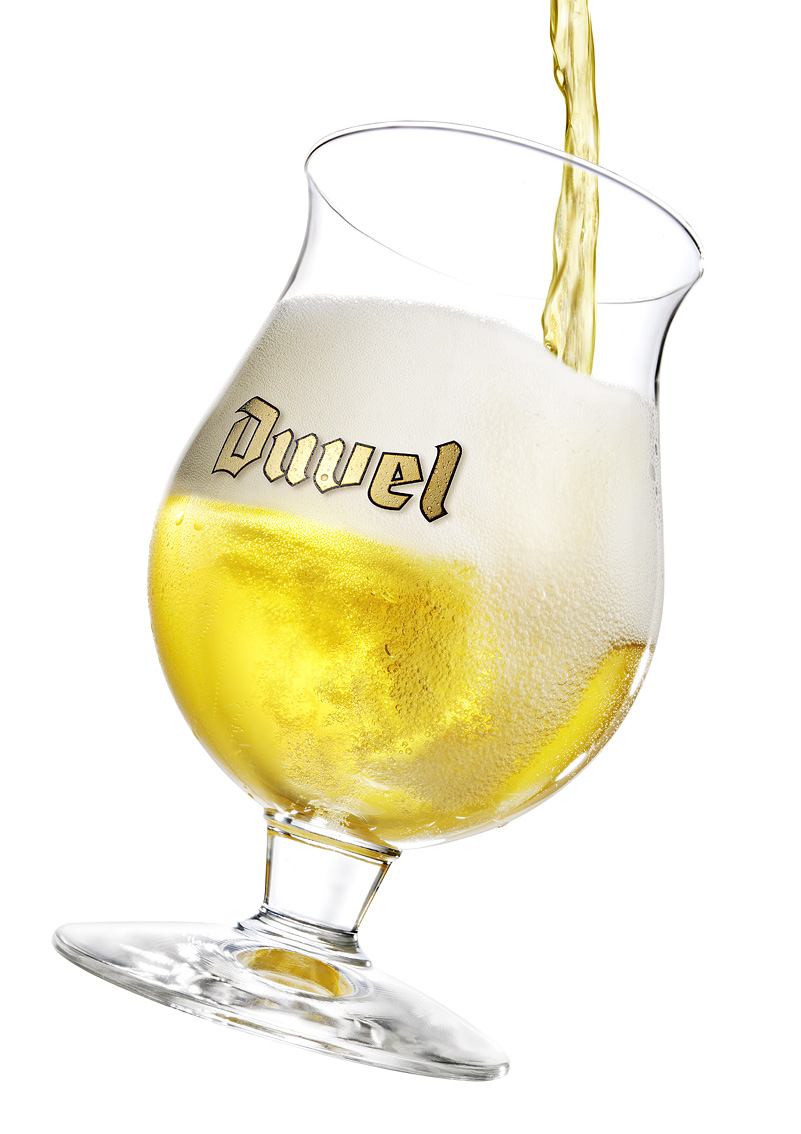 SHELF LIFE             24 months
SERVING TIPS         Always serve in the tulip shaped Duvel glass at 5°C
PACKAGING             33cl, 75cl, 1.5l magnum bottles
To commemorate the end of World War I, the Moortgats named their main beer Victory Ale. In the 1920s, an avid drinker described the beer as “nen echten duvel” (a real devil in Brabantian Dutch) – perhaps in reference to its formidable alcohol content (8.5% ABV) – and the name of the beer was changed to Duvel. It has become the brewery’s flagship beer. Considered by many the definitive version of the Belgian Strong Pale Ale style, Duvel is brewed with Pilsner malt and dextrose, and hopped with Saaz hops and Styrian Goldings, the yeast still stems from the original culture of Scottish yeast bought by Albert Moortgat during a business tour of the U.K. just after World War I. 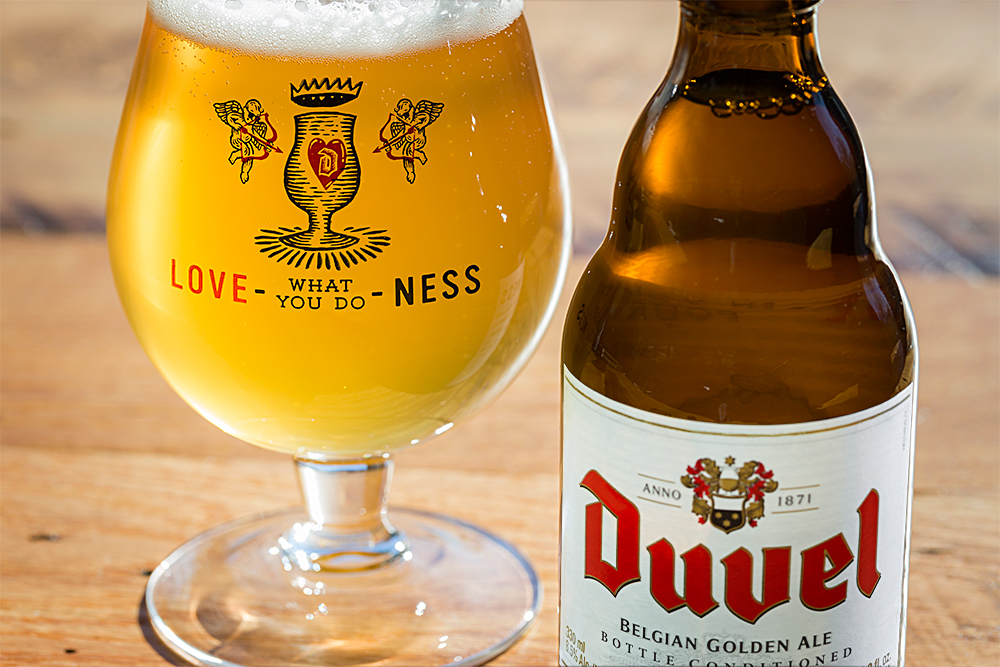 In 2007, a special version of the regular Duvel, which typically uses 2 hop varieties, was released. This limited-edition product added American hops of the Amarillo variety, boosted the alcohol content to 9.5% ABV and is called Duvel Tripel Hop. In 2010, a second limited-edition of Tripel Hop was brewed after a bet with the Duvel Moortgat CEO. If the Facebook group We want Duvel Tripel Hop reached at least 10,000 members, a second edition would be brewed. The group reached 10,000 members within a few months and the CEO stuck to his promise.

In 2012, the brewery decided to make the Tripel Hop an annual limited edition product.The 2012, being the first, was made with the American Citra variety. The 2013 version uses Sorachi Ace, a Japanese variety.

The Vedett, a pilsener, was created in 1945 by Albert Moortgat, Jan’s son. Since 2003, Vedett has been relaunched as a trendy luxury lager, aimed at young customers in upscale urban bars. Vedett currently has a marketing scheme that gives customers the chance to have photos of themselves placed on the labels of bottles.These bottles are then sold commercially, so one never knows when one might run into one in a bar.

In 1989, a wheat beer was launched in collaboration with Palm Breweries called Steendonk (referring to the villages of Steenhuffel and Breendonk where the brewers are located).

In 2000, a new beer (Passendale) was born as a result of the association between Moortgat and cheese factory Campina (which produces Passendale cheese). This product has since been discontinued.

From 2001 is brewery 50% owner of Czech brand Bernard from Humpolec city. Pivovar_Humpolec

In 2003, they acquired Brewery Ommegang in Cooperstown, New York.

In, 2013, it was announced that Duvel Moortgat would be acquiring a majority stake in Kansas City, Missouri craft brewer Boulevard Brewing Company.